Reports have suggested that Microsoft is working on a unified email client for Windows 10 that will replace the current Mail and Calendar apps. This new client, which is based on the Outlook web, is codenamed Monarch and the user interface is designed for all desktop shape factors.

In one of the documents, Microsoft previously confirmed that it is working on a “One Outlook” client that works on Windows 10, macOS, and the Internet. This allows the company to replace existing clients, including Outlook Win32, UWP, and Outlook for Mac.

In outlook beta for Windows release notes, Microsoft has now accidentally posted a screenshot of a new Outlook app with updated icons and rounded corners. The screenshot shows what appears to be a future version of the web-based Outlook app and it could be introduced at the Sun Valley update event in June.

Microsoft wants to change the look of standard/native Windows apps and use rounded corners for app windows. This new leak seems to support our theory and findings.

While rounded corners may not be such a big issue for some users, sources have indicated that this design language is part of Microsoft’s plan to address UI consistency issues on Windows 10. Coupled with other cosmetic changes, it can make a big difference, with apps looking more modern and giving the interface a fresh feel.

As you can see in the screenshot above, it also looks like Microsoft added additional padding to the close, maximize, and minimize windows buttons. Similarly, the Outlook app gets new icons with rounded edges.

The updated Outlook client comes with a new feature called “Org Explorer” for business customers. The Org Explorer helps you explore the people and teams around you so you can contextualize and visualize them.

To start this new explorer, you need to click on the new Home ribbon icon and tap a person’s map or icon to see more details.

Upon completion, Microsoft’s upcoming Outlook client will provide a unified look across all platforms, whether running on Windows 10, macOS, or the Internet.

In addition to Outlook, Microsoft is also working on new features and improvements for other inbox apps. 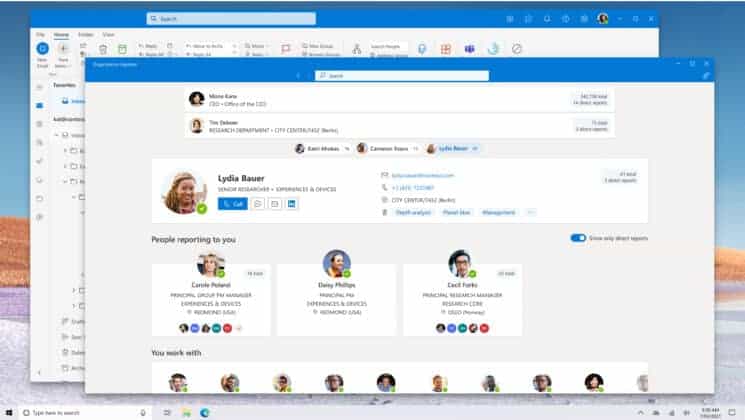