Last September, Microsoft announced that it would be introducing several improvements to Teams meeting attendance reports. The company started rolling out this update a few weeks ago and the rollout should be complete by the end of this month.

You can now turn a Microsoft Word document into a PowerPoint presentation.

In addition, Microsoft Teams has added some extra information in the report. The attendee list now includes the meeting duration, email address, meeting start time, and meeting title. This is in addition to the name, role, time of attendance, and time off of the meeting participants. Karoliina Kettukari, a Microsoft MVP, recently shared a screenshot of the new attendance report format on Twitter.

This particular feature has been requested by thousands of users since the ability to download the attendance reports was introduced in May last year. The new experience is designed to make it easier for managers and educators to track participant participation in remote meetings. In case you missed it, Microsoft Teams recently rolled out a new live transcription feature for English-speaking users in the United States. 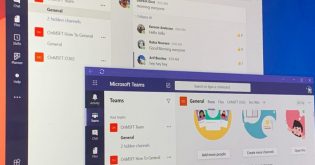