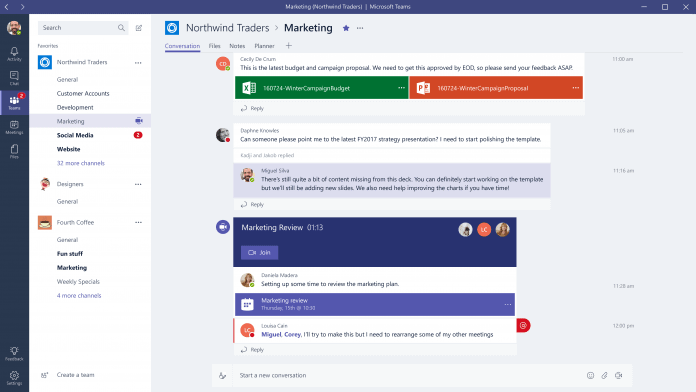 What does a Microsoft Teams workspace consist of?

The basic shape of a workspace in Microsoft Teams has three components: the team workspace (including sharepoint file hosting), which acts as a permission limit; channels, which focus and distribute areas of focus; and tabs, which display the most important artifacts, data, and apps used by team members. Think of channels as your attention limit and the team as your membership (which has access). More about private channels and how that will come later in the game.

Workspace access security is managed by a Microsoft 365 group (formerly Office 365 group) – if you’re in the group (capitalizations), you have access, and if you’re not – unless the group is open to everyone within the Microsoft 365 tenant.

Within each team workspace, channels are used to distribute areas of focus – such as by subject, project, customer, geography, type, and so on.

And within each channel, there are tabs to enable conversations within the channel and look up relevant sources, systems, information, and documents.

The minimally viable Team workspace has one channel (called General) and two tabs: one for calls and one for file sharing. The file-sharing tab is actually a SharePoint within Teams, and the user can navigate to the full SharePoint site interface from that Team.

For multi-channel team workspaces, each team member can choose which of the channels (areas of focus) he/she wants to be kept informed about.

During the first three years of its existence, access to a team workspace in Microsoft Teams gave access to all channels and tabs. But as Teams gained broader acceptance in many industries and organizations, private channels became the most frequently requested feature on Microsoft User Voice.

Organizations needed more than just the soft attention boundaries of a channel within a particular team workspace. Channels themselves should also have the ability to enforce a security boundary.

While a separate team workspace can be created for a subset of users, that approach doesn’t always fit into a team’s work dynamics and can lead to fragmented participation of many teams over time.

Microsoft used its annual Ignite conference in November 2019 to bring private channels to market, where membership can be defined both at the workspace level and at the channel level. Private channel membership is enabled for a subset of the team workspace’s general member list.

Help: Change your background for a Teams meeting⚡

While channels separate attention, as a communication boundary, within a team workspace, the real work is done on the tabs.

Tabs host the conversation, provide access to a list of relevant files, display a Word document or Excel spreadsheet for co-authoring, show a Microsoft Planner or Trello Kanban board to coordinate current work, and more.

Each channel needs two core tabs per design for calls and access to files, but outside of these two there are plenty of possibilities.

The Files tab stores all documents, presentations, spreadsheets, and other file types associated with the channel, and provides an integrated file-sharing experience (again with SharePoint as a backend).

The ability to display a Word document on a tab provides integrated co-authoring within the team workspace, removing the burden and inefficiency of co-authoring through email attachments.