How fans can enter the digital seats and get out.

The NBA got back into action and brought virtual fans into an experience powered by Microsoft Teams. Some fans who missed that the future with technology had been made possible thanks to the coronavirus, wondered how they could get into the digital seats.

The NBA invites about 320 fans per game to fill the virtual booths – these are video boards over a foot and a half high that take to the field. It’s up to each team to decide how to select those fans for games played in the NBA’s bubble in Orlando, Florida.

According to The Wall Street Journal, designated home teams are allowed to choose most fans. Participants need a device with a camera and microphone. The Milwaukee Bucks, for example, invite “super-pumped” fans who form a noisy section known as the Clutch Crew in their home arena.

Using Microsoft Teams Together mode, fans sit in each of the 10 sections around the field and are assigned a moderator to each section. While it might be difficult to score a free invitation, the wrong behavior would make it easy to get thrown out.

The WSJ reported that moderators can hear fans and see what they are doing and that anything that crosses the line in obscene or offensive language or behavior can lead to a virtual expulsion. That fan would be replaced by another fan in a virtual overflow room. Fans who leave their seats while playing will also be replaced by someone from this pool and when they return, they have to wait until they are placed back in the crowd.

The Oklahoma City Thunder told the newspaper that fans are encouraged to cheer and sing, but waving things like towels and balloon clogs is ‘a bit of a challenge’ because the tool for setting the background in Teams often distorts everything around someone’s silhouette.

The NBA has shared more about all of its broadcast improvements in a new YouTube video: 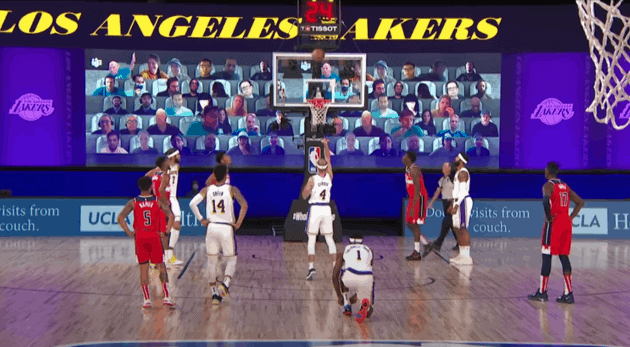