What’s the difference between Microsoft Teams and Slack?

Microsoft Teams is tailor-made for teams. As CEO Satya Nadella said, Microsoft Teams brings together jazz ensembles, cricket teams, and crew races to discuss things related to the specific groups. A team app was the whole idea behind the creation of this Microsoft app. Slack actually called out Microsoft for creating a competitor and even gave them a little “friendly advice” on an open platform, approach to customer service and user experience.

For the time that Microsoft Teams exists – about two years – it has grown in features and integrations. On the other hand, Slack Has eliminated Stride and HipChat, which were previous competitors.

Below are a few differences between Microsoft Teams and Slack

Microsoft Teams Pro is coming with webinar capabilities and more.

If you’re a Slack user, you’ve probably come across Slackbot. This is a private chat window that users use to send links to themselves and try out different GIFs or integrations. This chat window can also give you answers to your questions.

Unlike Slack, Microsoft Teams has two built-in helper bots – T-Bot and WhoBot. Like Slackbot, T-Bot uses Microsoft Teams data to give you answers to your questions. However, it gives you some user interfaces to get your answers. If you’re a Microsoft Teams beginner, T-Bot is the best place to take your first steps. The tabs at the top contain videos, FAQs, and Help topics that can guide you through the app. WhoBot, on the other hand, brings out the difference in functionality between these two collaboration apps more. Built on the Microsoft Graph Framework for Artificial Intelligence (AI), this bot answers questions about certain employees. This bot essentially searches the company’s intranet from Microsoft Teams. It does this by extracting data directly from the Active Directory (AD). It can get personal details about a specific person, including which department the person works in and his or her boss. This bot can give you a whole report on the whole department and show you who their boss is. It can also reveal who is competent in a particular area.

WhoBot arrived in January 2018, making it a recent development of Microsoft Teams.

Slack integrations mainly have the GIFs and emoji. In Slack, you can easily perform a gif command or giphy with many hidden commands to further customize.

On the other hand, Microsoft Teams has multimedia options at the bottom of the chat. Once the user clicks on these options, they get a pop-up window with different types of GIFs and emoji options.

Initially, the integration difference between Microsoft Teams and Slack was that the user could preview a GIF in the previous version without typing what they’re looking for in a slash and waiting for what appears. After a while, Slack took over this trick, too.

There is also the custom meme generator. The meme options in Teams allow you to upload a custom image or select one from known memes, and then add it to the text. Microsoft has adopted the Facebook style of having its own sticker sets, which allow users to select stickers.

The Microsoft Teams app has tabs for Teams, Activity, Files, Messages, and Chat in the navigation bar on the left. On the activity dashboard you will get all the information about the company. As in Slack, as soon as your name is mentioned in Microsoft Teams, you get an exclamation that someone has mentioned you. This is the same on the Teams and Chat tabs. Direct messages (DMs) appear on each tab, as colleagues are at the bottom of each chat window. The conversation bar also has options that you can use to type a message, attach a file, or send a sticker, emoji, or meme. During this coronavirus pandemic, you can chat with colleagues at home. Having a Microsoft Surface is even better because it’s perfect for Microsoft Teams. The details make it best for this app.

In Slack, you have several themes that can help you customize or change your UX skin. When you select the Themes options in the settings wheel at the bottom of the navigation bar on the left, you’ll find three options. These are the light theme that is the default option, the dark theme option, and the high contrast option that is suitable for the visually impaired.

If you click on a specific team and select “Add tab,” you can add Microsoft Meetings, Word, Notes, Planner, SharePoint, Excel, PowerPoint, OneNote, and any other app that actually duplicates the app’s full functionality.

Once a team is created on Microsoft Teams, a SharePoint directory is automatically made available behind the scenes. This SharePoint directory has a folder that represents each channel. Once the team is created, you can select a file and open it directly in Microsoft Excel, Word, or on the integrated Microsoft Office 365 tab. This facilitates the search for content and interaction, unlike Slack. While Slack search is powerful, it can’t match the file mapping in Microsoft SharePoint, finding new content your team needs regularly.

If you’re interested in a business intelligence tool like Microsoft Power BI, Microsoft Teams can give you the ability to use the app within your team and continue to communicate with your colleagues while you see all the data. This tabbed-based integration system is such a big productivity bonus for Microsoft Teams.

Microsoft starts rolling out the new Tasks app in Teams

If a left navigation channel has a video icon, it means that a video meeting is going on. To go to the ongoing Skype call that appears in the feed, click the Team icon, go to the main feed, and then click a box marked “join the conversation.”

Teams also have new meeting features, such as background blurring, that removes any distraction during the video meeting. The app also has meeting recording features that have been sufficiently enhanced to allow users to view and view recorded images, as well as a Microsoft Teams-powered transcription that allows you to get results for specific keyword searches.

See how different Microsoft Teams are from Slack? Although they are very similar, their characteristics and functionality show the clear distinction between the two. Each of them evolves with time and offers its users features that make the apps more fun and user-friendly. If you want the best of Microsoft Teams, purchase a Microsoft Surface device. The fast and more developed features are why Microsoft Surface is perfect for Microsoft Teams. 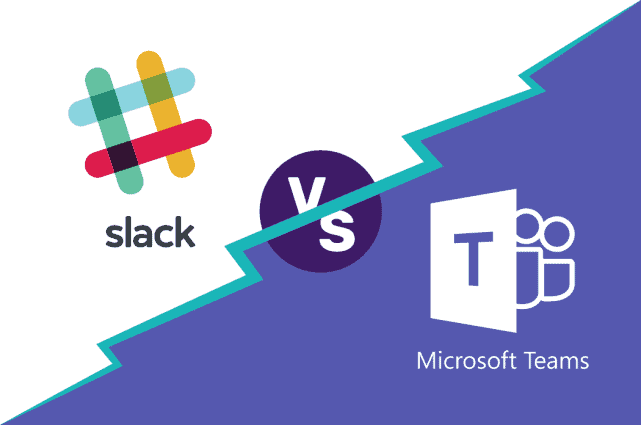